Home / All about selling / "The best person to sell my home was me!" - Jérôme Couture 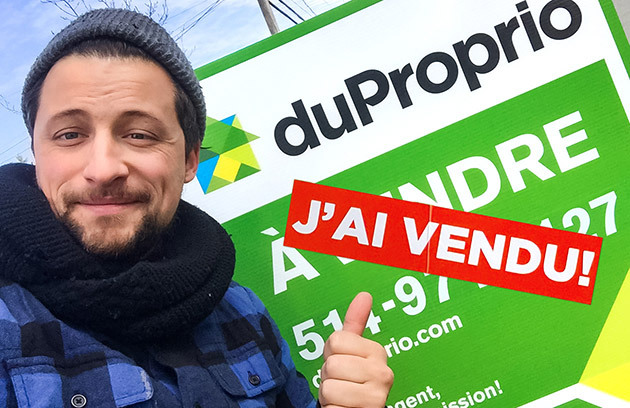 "The best person to sell my home was me!" - Jérôme Couture

Four months after putting his Saint-Hyacinthe home up for sale with the help of DuProprio, singer Jérôme Couture was able to start packing boxes this spring. He can now move on to other projects, like finding a new home for him and his girlfriend.

“I had to sell quickly, and I thought, ‘Why not try DuProprio?’” The artist explains that he saw a great opportunity to save money that he could use to purchase his next home. “I was confident that it would go well.”

His home, built in 1878 and located some distance from major urban centres, would appeal to a niche market. It was put on the “Favourites” list of several visitors and, finally, during an open house, the right buyer came along.

This popular 34-year-old singer found the experience of selling his property pleasant and profitable. He felt that, without an intermediary present, the visits were more informal and that this simplified the process.

“Families came with kids,” he explains. “Everyone was laid back. It was much friendlier. I also realized that the best person to sell my home was me, because I know what renovations I’ve done, what the home’s best features are, and I could be completely open about whatever visitors wanted to see.”

Aside from saving the commission, it was this personal aspect that encouraged Jérôme Couture to sell by himself. “I thought it was a good approach for the buyer and the seller to sit down over a cup of coffee to talk, agree on an offer and then move forward. It avoids a lot of back-and-forth, when neither person knows what the other is thinking, and it cuts the waiting time until an agreement is reached.”

It was the first time Jérôme Couture sold a home with the help of DuProprio. Despite feeling confident throughout the process and having some knowledge in the area, he still had some questions.

“The jargon can come across as hard, but in the end, it’s not very complicated,” he says. “Sometimes, we lack self-confidence, especially in something important like selling a home: we’re afraid of the documents; we’re afraid we’ll forget some or fill them out incorrectly. We feel we’re lacking information, and that can be scary. But DuProprio demystified all of that for me.”

After a very instructive initial meeting with the DuProprio representative, Jérôme called our team of notaries twice to get some information, for instance on the timeframe for fulfilling the selling conditions.

“I had some ideas, but it was reassuring to know there were people available to answer my questions,” he says, in conclusion. “There can be some uncertainty in the process, so calling on the experts, like a notary, gives you the knowledge you need.”